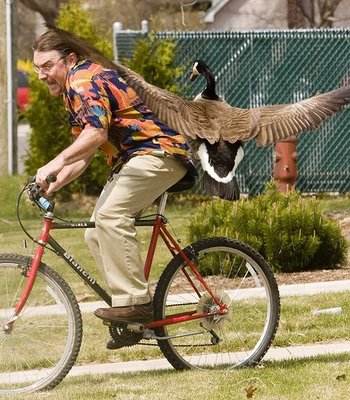 A list of crazy things that you may experience when learning to cycle.

One of the best parts of being a beginning cyclist is the pleasure of experiencing a whole new world of absurdity.  You’re going to run into, sometimes literally, all kinds of hilarious adventures.  Granted some of these may be slightly frustrating, but you’ll remember them all fondly.  See if you recognize any of the scenarios below.  Feel free to email me at editor@velopro.bike with any I missed.

Oh, my aching ass!  Every new cyclist complains about their heinie.  It is a right of passage.  It takes time to condition your ass/sit bones/ischial tuberosity for riding.  For the first two weeks, keep your rides to an hour or less.  Just remember, it’s not the saddle it’s you.  Any experienced rider will tell you that a seat with more padding only makes it worse. If you are an experienced rider, taking your first rides of the season, again it is not your saddle, it is you.  That new saddle you buy every season is a placebo.

This hill is trying to murder me.  Yeah, that tiny hill near your house hates you.  You hate it right back.  However, after almost dying the first few times, you get stronger.  Now that hill is barely a bump.  You laugh as you speed over it.  Great news! There are an infinite number of bigger hills that will try to murder you, regardless of your cycling experience.  Alp d’Huez anyone?

The zero-speed fall.  There’s nothing more embarrassing than coming to a stop, forgetting you are clipped into your pedals, and flopping over like a dead fish.  This happens to every cyclist learning to ride clipless.  Sure, it hurts a little, but the real injury is to your pride.  Just don’t do this at a busy intersection like I did where everyone can see and then ask, “Are you okay?” Repeatedly.  Practice unclipping.  Practice.  Practice.

I just ate a bug.  I estimate I’ve eaten over a pound of bugs in my cycling career. Flies, bees, mosquitos, a wasp, a dragon fly, and water-bug looking thingy.  Blech.  That’s what you get when you’re at speeding along, breathing through your mouth.  Just know that eating a bug does not give you enough calories to replace a gel or Cliff Bar.  Consider it a yummy protein supplement.

Dogs, Geese, Deer and Kangaroos.  I love close encounters with animals except when I am on my bike.  I have dodged off leash dogs, swerved to avoid early morning deer and sped up to escape an angry goose.  Not to give short-shrift to the snakes, bunnies, squirrels, and cats I’ve narrowly missed.  How about Kangaroos? Less of a challenge here in the states, but in Australia, see for yourself.

Two flats one spare.  You take a class or watch YouTube videos and learn how to fix a flat.  You always carry a spare tube and a cannister of air.  Finally, the inevitable happens and you flat out on a ride.  You’re so proud as you fix the flat and go on your way!  You did it.  Until you flat again a half mile later.

Fool in the rain.  Getting caught unprepared in the rain is a huge bummer!  No fenders equal a wet, muddy stripe from your butt to your helmet.  No rain jacket means that you’re going to be drenched and most likely cold and miserable.  When in doubt, stick that rain jacket in your center-back jersey pocket.

Pedestrian and motorist fails.  The most dangerous animal is indeed a human.  Here are some of the examples of what you may face while riding in a bike lane or on mixed-use path.