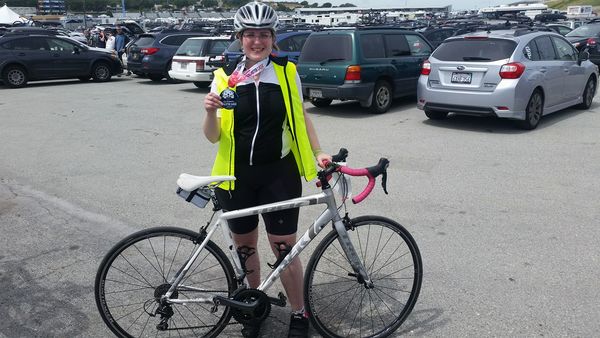 I Survived a Serious Crash and Got Back in the Saddle

I bought my first road bike in May 2016 so I could go to a women's seminar for beginners. Before I had been riding a cruiser that wasn't overly enjoyable to ride. This was a 2010 Trek Lexa SLX with a triple crank set and it had hardly been ridden before. Within a month, I had crashed it by going too fast into a turn on wet pavement. As I braked and the back wheel slid under me, I threw the bike away from me and rolled in the grass unhurt. I damaged the bike; the non-drive crank arm was bent from the pedal digging into the pavement. In hindsight, I should have ridden in the grass and not tried to keep myself on the bike path.

The bike was repaired and I completed my first event in August, the Blackberry Bramble's 50 mile route. It was hell and I wasn't feeling great that day, but I completed it and that part felt great! Also, I was getting ready to travel to Michigan in September for my best friend's wedding. Mackinaw Island, where the wedding was held, boasts no car travel at all and allows for bicycles, horses and walking as the only modes of transportation. One of the parts of the trip I was looking forward to was going to be riding around the island on a bicycle. This was not to be...

"The last thing I remember was putting my foot on the pedal to push off. Less than a mile in, I had crashed and don't remember any of it."

The weekend before I was flying to Michigan, a friend and I decided to ride the Row River Trail out of Cottage Grove. It was a beautiful late summer day and we had a great ride up to the Culp Creek Trailhead. We had ridden this path a few times before. At the trailhead I drank some water and did a quick rest. My friend told me to kick it off when I was ready to head back down. The last thing I remember was putting my foot on the pedal to push off. Less than a mile in, I had crashed and don't remember any of it.  I don't know what happened and my friend was right in front of me and doesn't know either. My next memory is of my friend standing above me and asking if I could get up. We walked to a store nearby where we were able to get a ride back to Cottage Grove (I refused to be taken by an ambulance). The whole time I kept repeating myself and was worried about my trip.  I don't remember this.

We got back to the car and when I was sitting in the passenger seat I took a picture of my right knee. It was bleeding a little and it definitely had a gaping wound. I sent the picture to my husband and it was the only thing I was worried about. I don't remember doing any of this of course. After getting to the ER, I had a CAT scan due to the concussion. I also insisted I needed stitches in my knee that were not necessary. My husband got there and figured I was done riding a bike ever again, but when I looked at him I apparently said, "Honey, I need a new helmet." Eventually I started regaining awareness and then I was released. 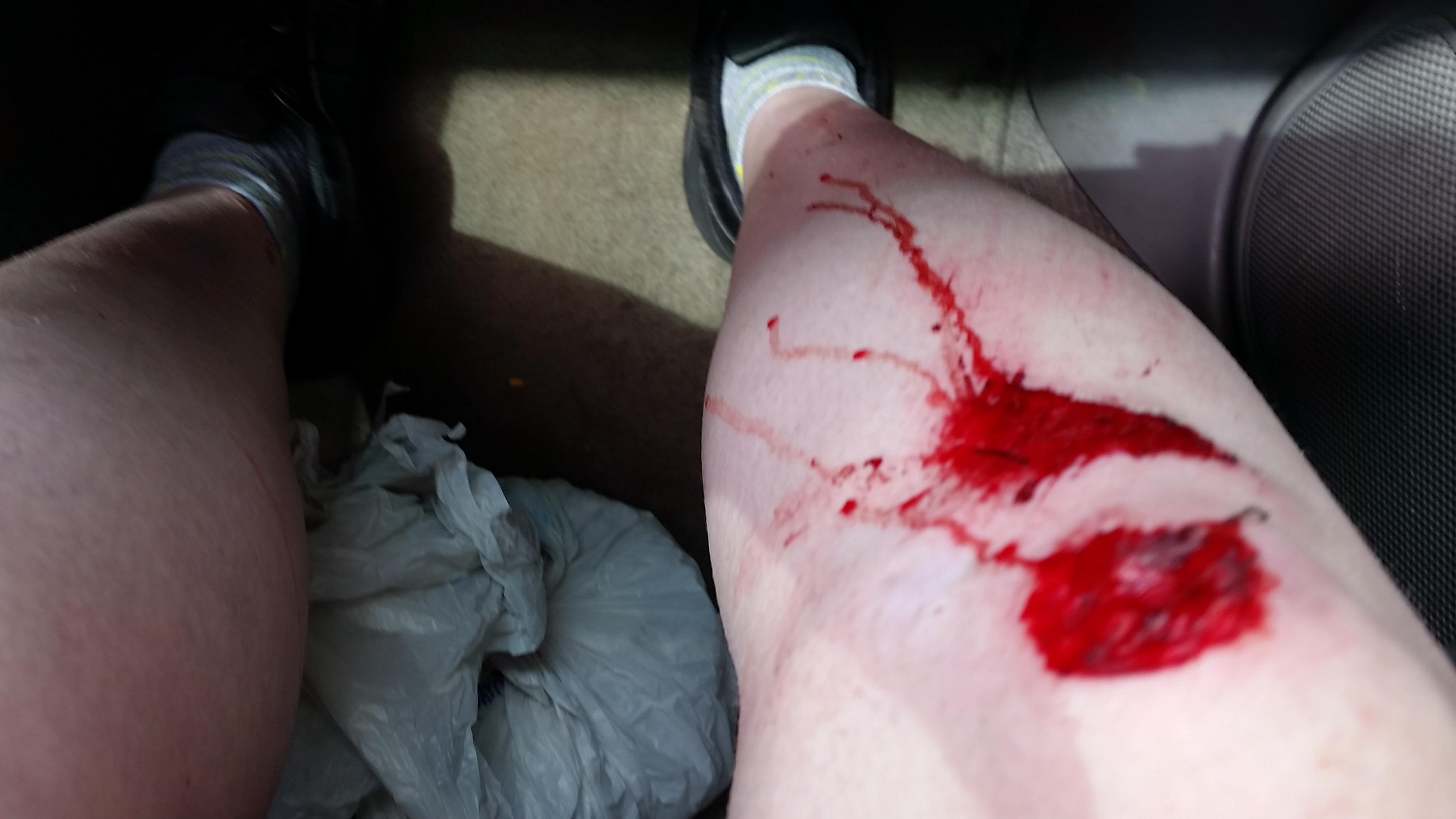 The knee wound was very dirty and the ER staff had irrigated and cleaned the debris the best they could. I was given an antibiotic to prevent infection and had to keep Neosporin and dressing on it. It hurt to bend my knee at all, so I hobbled along. Aside from the knee, I had some road rash on my hands that I have scars from. My helmet did it's job and my prescription glasses had a scratch on the frames, but didn't break.  As for the concussion, I laid in a reclining chair, which was in the darkest room of our house and absent of any stimulation. This allowed my brain to start healing. I mainly stayed there, though I tried to go to work the second day and realized the computer screen was just too intense. I still flew to Michigan; being on a quiet red eye flight helped my head rest too. The only obstacle was my knee and trying keep it bent enough during the flight and getting to my connecting flight on time.

For a short time I had trouble focusing, more headaches than normal and experienced eye strain especially after looking at a computer screen for too long. The one residual thing I have noticed since getting the concussion is that I have a hard time with names and placing faces of those I have just met. It's very apparent at work where we have new customers and I can't remember a face of someone I had just spoken to 10 minutes prior.

My knee took a very long time to close up completely and I also learned that I was allergic to Neosporin. Keeping the wound moist was sometimes challenging and I had some scabs form. The doctor said it would be a long healing process and that debris could potentially work its way out for up two years. Until the knee healed completely with new skin, bending my knee to a sitting position was challenging and painful.

In the early spring, my husband, friend and I decided to go to the Sea Otter Classic in Monterey, CA.  My knee hadn't quite healed yet when we made the decision and accommodations to go, but I was determined to ride the 50-mile Gran Fondo. I hadn't been on a bike since the accident and so I put my bike (which sustained only some minor scrapes) on a trainer and started to pedal with 6 weeks to prepare. I would ride outside some, but was very under prepared for the Gran Fondo.

Once we arrived in Salinas/Monterey, CA we did a casual ride Pactimo was putting on starting in Monterey and going to Pebble Beach. It's a popular cycling route and has quite a few rolling hills; it wasn't a very long ride. I couldn't keep up with the group and my knee was bothering me. I texted my husband that I was going back to the meetup spot, but I wanted him to continue because this was his birthday trip.

A couple days later was the Gran Fondo and there were hundreds of cyclists lining up behind the starting line. I rolled out after the masses, which you ride the track a short distance and then proceed on a road that heads down the hill towards Monterey. It was fast and in the back of my mind I thought about the fact I would need to climb back up this. What am I thinking? It was a beautiful ride down, blue sky and surfers out near the pier. A portion of the ride was on a busy bike path, but I made pretty good time down the out and back ride.

"Had I remembered what happened the day I crashed, would I still be riding a bicycle? Yes, I think so because I am fearless."

It's mainly all climbing back and I did fairly well at first until the last big hill at the end. The weather had changed and it was getting cloudy and very windy. I was fighting a cross wind. I was tired and my knee was bothering me. The last three miles I pushed the bike up quite a few times. Eventually I neared the finish and rode in to collect my medal. I was proud of myself for not giving up and finishing, but I wish I could have ridden it all. In the near future I would like to tackle that Gran Fondo again, healthy and properly trained.

Had I remembered what happened the day I crashed, would I still be riding a bicycle? Yes, I think so because I am fearless. Did I bonk? Did I hit something on the path? Did I ride off the pavement and try to correct myself? It seems I will never know these answers. Riding that path now, I am still a little shy. Overall, I am not scared to ride - I just don't want to fall on my knee again. I have come a long way and learned many valuable lessons since I started cycling.