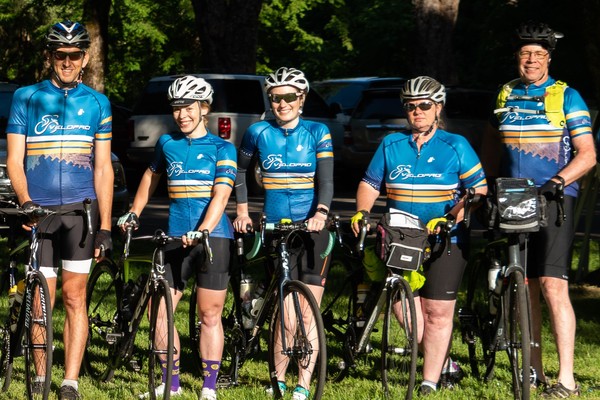 Sometimes it takes more discipline to stop than it does to continue.

Yesterday was the Mohawk Valley Metric Century.  *Spoiler Alert* I finished.  I wasn’t feeling very prepared due to a few injuries and illnesses along the way that put a stop to training for days at a time – the most recent was 2.5 weeks ago when I fell (more like being pushed off the road by a lifted-diesel spewing monster truck with one of those anti-environmental stickers.) After having my wrist splinted for a week, I wasn’t sure how that was going to do – why hadn’t I fell on the non-shifting, non-braking hand?  That, along with my knee worrying me did not leave me with a lot of confidence that morning. I decided to do the best I could do and know my limits and listen to my knee and wrist.

It was great to meet up with the team and get a bit of conversation in before the photos and before we headed out. My strategy was to do my own ride, listen to my head and body and make sure I paid attention!

The first big climb was not an issue, I was slow, but made it up despite a small panic when I couldn’t get my foot unclipped (stupid knee) when I needed to stop for a minute at the top to switch water bottle locations (switch empty and full bottles so my wrist didn’t have to reach and pull at an angle.

Just before the rest stop at mile 41, I realized that I took a wrong turn. Luckily for me, my wrong turn at this point only took me one street away on an angle, but I ended up on a one way street going the wrong way for half a block. At the rest stop, I met up with Jon and then just a few minutes later, Bethany. We all left together, but I warned them that I would be hanging back on the big climb on Gap Rd.  Both my wrist and knee were tired by this time and I knew I had to back off if I needed to in order to make sure I didn’t injure either of them again.

I stopped part way up the climb at a relatively flat spot with some shade, got off my bike, stretched my knee and walked around a bit to give it a rest.  Cyclists are such nice people; everyone coming up the hill took a moment to ask me if I was ok.  I got back on my bike and thought I would make a push and get over the top. Unfortunately, it didn’t work that way. I was about 200 or so feet from the top, I could see the crest, but my knee yelled at me to stop. As frustrated as I was, really thinking I should just go for it, I saw the look that would be on my orthopedic surgeon’s face, on my partner’s face, and how angry I would be at myself for NOT stopping. So, I did. I stopped and walked my bike to the crest. As much as I wanted to push, I know that walking was the right thing to do. I took advantage of the time to drink an entire water bottle as I walked.

As discouraging as injuries can be, and as difficult as it can be to actually hold yourself back from something you really want to do, it’s usually better to listen to the warning signs your body gives you. I knew I probably could have finished that climb, but with the feeling I was getting in my knee I also knew it wouldn’t be the wisest thing to do. Sometimes it takes more discipline to stop than it does to continue. That was the case for me yesterday. So, today I am home thinking about the next ride when I might have been cursing myself for not listening to my body.  I’m ok being slow. I am thankful I have the ability to ride. I’d like to keep it that way.